While virtual reality is by no means a new technology, with precursor technologies like the View-Master invented in 1939 and The Sword of Damocles invented in 1968, interest in the technology waned in popularity due to the clunky hardware and limitations in video rendering of the time.  As you can see by the attached picture, the headsets were by no means easy to wear or navigate.

Ivan Sutherland and his “Sword of Damocles”

But hardware and software developments have come a long way since then, to the point where now companies like Goldman and Sach are projecting that VR could be “bigger than the TV industry” by 2025, and will generate $110 billion dollars in annual revenue within the next 10 years.

So it is exciting that 2016 will see not one, but a half dozen or so Head Mounted Displays (HMDs) hitting the market. These headsets come at a time where there is already some stiff competition: the Google Cardboard, Samsung’s Gear VR, and Archos VR Glasses are already commercially available, and offer a more affordable entry to virtual reality as they are powered by smartphones rather than high spec gaming machines.

However, these headsets limit the user’s interactions, and so HMDs, with their position tracking hardware and optional touch controllers offer a much more engaging and intuitive virtual experience.

Since there is so much excitement around virtual reality, we thought we would write this post to give you a quick synopsis of some of the different VR technologies currently on the market and those being released this year. So, here we go: 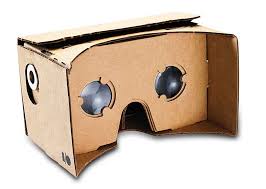 Released over a year ago, this portable headset is exactly as it sounds: it’s made of cardboard. The cardboard model costs only $5, though you can also get plastic frames for anywhere from $20 – $120 dollars. As a portable device your content is powered by your smartphone. It also has integrated support for StreetView and Youtube 360, and as it is so inexpensive, is very popular for viewing cinematic VR content.

Released in November 2015, it retails for just $99. It pairs with recent Samsung smartphones (the Note 5, S6, S6 Edge, and S6 Edge+) and has a high resolution screen and calibrated IMU for better tracking compared to typical cardboard headsets. One of the advantages of the Samsung VR is that it already has many launch titles, which means it has plenty of content to experience. 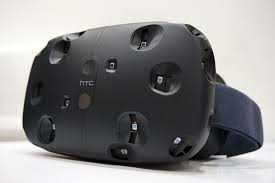 Photo of the HTC Vive from The Verge

A high resolution HMD projected to be hitting the market in April of this year. It comes with the Lighthouse system, a room-scale position tracking hardware that tracks your movement. This allows you to move around in virtual reality without limiting your range of movement in real time and space. It also comes with full position and rotation tracing hand controllers which allows for a more engaging experience compared to using traditional gaming controllers.

This HMD also has the benefit of being partnered with Valve, the largest online distributor of games, and an acclaimed game studio in its own right. This is a huge advantage as it means there will likely be a large availability of quality content when it’s released.

The only downside is that it will likely retail for quite a bit as it offers a premium virtual reality experience. It also means that it will require a solid gaming computer to pair with to render the high resolution content. While the official price hasn’t been announced, it will likely be comparable to the Oculus Rift.

Speaking of Oculus Rift, this HMD is also projected to ship between the end of March and early April this year. It has the same high resolution specs of HTC Vive and similarly uses a room tracking hardware called Constellation. It will ship with an Xbox controller instead of their Oculus Touch controllers, which will be sold separately at a later date.

Pre-orders are already available, and for Canadians the cost is $849 before taxes and shipping. If you’d like to try out the Oculus before buying, we have got a preorder in and are expecting to receive the Rift in April.

Originally called “Project Morpheus”, it doesn’t have the same high resolution specs that the HTC Vive and Oculus Rift have, but has a higher refresh rate. It ships with the Playstation Move controllers and with its background in gaming has the potential to offer the best, most compelling content. In fact, The London Heist is one game already making a name for itself. Another benefit is that it pairs with the Playstation 4, which is more affordable than your average high spec gaming machine. Read more and find out about entrepreneurship in Canada.

The price is currently unknown though projected to be comparable to the Oculus Rift. Unfortunately it’s not likely to be available until Q2 of this year.

So, that’s a quick recap of what to expect from the major players this year. And this is just the tip of the iceberg. Many more HMDs and smartphones are in development and projected to released this year that support Virtual and Augmented Realities. So it’s official: 2016 is the year of VR.