REAP and the Felt Lab played host to 13 secondary school students and a single teacher on Thursday the 5th of December as a part of the Zoom Challenge Day. This day is a half day event organized by the Business Education Partnership. Students are placed with a company to work on real life projects. These projects introduce students to work life and gives them practical experience working in a company. 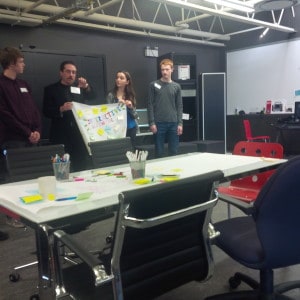 The morning at the Felt Lab started with a tour of the various technology focusing on Augmented Reality (AR). The AR station at the Felt Lab showcases various uses of several different software applications on multiple types of devices.

Following the tour, the students were split into three groups and were challenged to create an  application for AR that would enhance the secondary school experience, or function to save school boards money.

The afternoon was set up like a collaborative hackathon. The process began with individual brainstorming that moved to sharing within their small groups to be able to single out the best idea. At this point the groups were charged with pitching their ideas to three judges who would determine the winning idea over the three groups.

The ideas ranged greatly with the students having to work out all the attributes to build the idea. Ambitious groups even calculated the potential savings to the individual schools, to the region, and even to the nation if their idea was implemented.

In the end, the judges settled on an idea of how to create study workbooks for each school subject with each book being just a few pages. The pages would contain triggers that would be augmented with new content as the school year progressed. The books would be light, easier on the environment, much more cost efficient with the content entirely controllable by individual teachers. This would still allow an experience that can be tailored to individual classes while still following curriculum.

Some students likened the experience to being on Dragon’s Den. The ability to build an idea and then pitch this idea to judges in the style of a competition introduced students to a situation that resembles a real life startup situation. The ability to experience innovation and entrepreneurism first hand reflected the nature of the Zoom Challenge Day preparing the students for a real life experience in building a company through the process of designing a complete idea.